When he arrived in Barcelona, one of the things that shocked Albert Soler the most was the number of people sleeping rough, and he wanted to channel the anger and helplessness he felt into something positive. After volunteering on a night count of homeless people, organised by the Xarxa d’Atenció a les Persones Sense Llar in 2011, he was eager to do more.

Albert Soler likes to turn things around and look at them from a different angle, and was inspired to turn the situation on its head by painting homeless people’s portraits in a style once reserved for royalty. 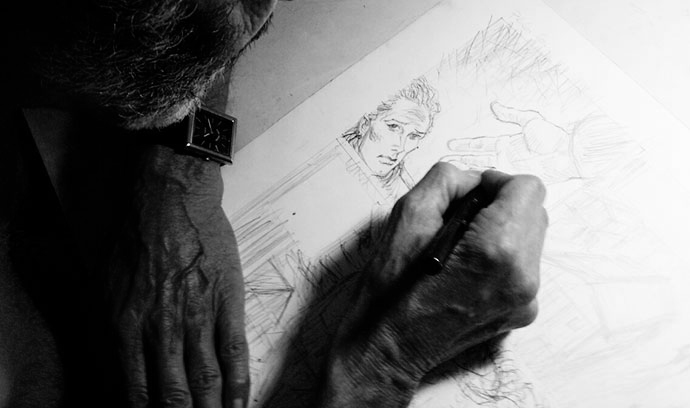 While researching the subject he became aware of the story of Miquel Fuster One of Fuster’s written pieces gave him the argument he needed to move the project forward. In the following excerpt, Fuster explains why he feels he needs to share his experience of life on the streets: He neither wants to forget nor be forgotten. He reveals the hurt he wants to be free of, but also shines a light on a reality that is often hidden in plain sight. This text inspired the Retrats Sense Sostre project:

The only thing that matters to me is that the interminable agony, and the slow death of dreams and ideas that I’ve endured these past 15 years on the streets should not rapidly sink into oblivion. Although it may seem that the unfortunate events that make up my story are of interest to me and me alone, that’s not the case. My tragedy is by no means unique; it’s the same story for other men and women. Life has dealt us a devastating blow for the mistakes we’ve made.

I’ve spent 15 years of my life on the streets, sharing in the pain of others in the same situation, constantly anguished by the perpetual battle against the loathing and rejection that being homeless provokes in others, continuously humiliated and scorned. The threats turn us into frightened beings constantly convinced that we have lingered too long in any one place. We live in a permanent state of inferiority and disability without the possibility of escape. To temper all these indignities, we seek refuge in alcohol and heap dirt on ourselves

They say that in order to be free of something you must put it into words. Having already overcome the initial fear of dredging up my sinister past on the streets and revealing the wounds that precipitated my downfall, I decided that it was my professional responsibility to publish it. And although the emotions are mine, I hope that this second album doesn’t leave readers feeling indifferent. I hope that they try to make sense of the tragedies that surround those suspicious lumps on the street that are the destitute.

Excerpt from the introduction to the graphic novel “Miguel. 15 años en la calle. Llorarás donde nadie te vea.”(Miguel: 15 Years on the Streets. Crying Where No One Sees You”), from Miquel Fuster.